Ever since the Berlin conference of 1883, which Belgium’s King Leopold II called “the sharing of Africa’s cake,” the West has assumed exclusive rights over sub-Saharan Africa. But, while centuries of struggle to end colonial rule and apartheid have not changed this much, now Western influence is being challenged by China, which likewise covets Africa’s rich reserves of minerals and resources. 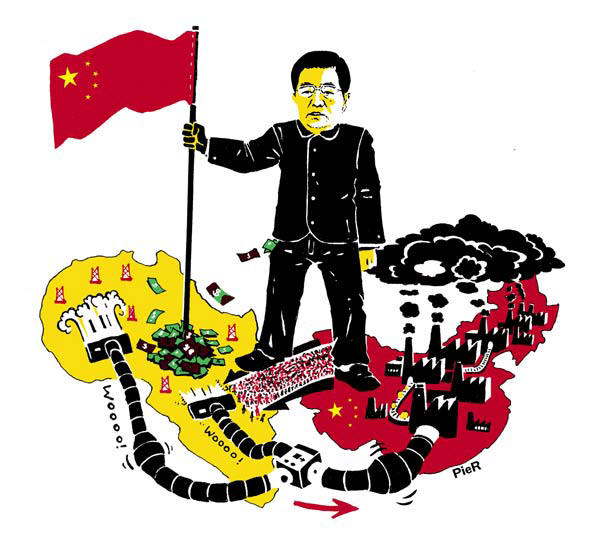 China is winning goodwill across the continent by tapping into shared anti-colonial resentments – and by treating the continent seriously. The next meeting, later this year, of the China-Africa Cooperation Forum (CACF), established to promote trade and investment, will include 46 African heads of state, along with China’s leaders. In any case, Chinese President Hu Jintao, Vice President Zeng Quinghong, and Prime Minister Wen Jiaboa visit the continent regularly.

China’s moves to strengthen its African ties have three objectives: to consolidate secure energy and mineral supplies, to curtail Taiwan’s influence on the continent (which harbours six of the 26 countries with which it maintains full diplomatic relations), and to augment China’s burgeoning global authority.

For example, Chinese representatives disbursed almost $2.3 billion to acquire a 45% stake in one of Nigeria’s offshore oil fields and promised to invest an additional $2.25 billion in developing the reserves. Angola, which currently exports 25% of its oil production to China, was granted a $2 billion loan in exchange for a contract to supply China 10,000 barrels of oil per day.

Sudan, which supplies 7% of China’s total oil imports, has benefited from the largest Chinese investments. The China National Petroleum Corporation holds a 40% stake in the Greater Nile Petroleum Company and has invested $3 billion in refinery and pipeline construction. Moreover, 4,000 Chinese People Liberation Army troops are deployed in southern Sudan guarding an oil pipeline.

Trade figures tell a similar story of growing influence. Sino-African trade grew by 700% during the 1990’s, doubled from 2000 to 2003, to $18.5 billion, and then jumped to $32.2 billion in the first 10 months of 2005. While trade and investment ties with China helped boost the continent’s overall economic growth to a record-high 5.2% in 2005, China also cancelled $10 billion in bilateral debts from African countries.

Yet closer relations have brought controversy. African countries have become large buyers of Chinese weapons and military equipment. In so unstable a continent, one saturated with weaponry, pouring in more guns is hardly welcome. Yet, as Chinese Deputy Foreign Minister Zhou Wenzhong put it, “Business is business, and China separates business from politics.”

Of perhaps greater long-term worry is the support that China provides to Africa’s authoritarian rulers. Economic growth without social justice merely prolongs the denial of decent living conditions to the majority of Africa’s people for the benefit of a tiny rich minority.

The fact that China, within a decade, has overhauled Africa’s balance of power, relegating the US and the UK to third and fourth place and challenging France for first place as the continent’s main economic and commercial partner, has irked these competitors. France has stepped up its monitoring of China’s African activities. To tie Europe closer to Africa, British Prime Minister Tony Blair even proposed eliminating the European Union’s agricultural subsidies under the Common Agricultural Policy.

Africa is the world’s only remaining “soft target” where outside powers can battle it out for access to mineral resources. But the last thing Africa needs is to be a battleground in an economic and political war. As Africans know from past experience, countries have no friends, but only interests.

The ongoing Darfur conflict illustrates the problem. Despite its declared commitment to non-interference, China’s interests in Sudanese oil imply otherwise. Thus, China threatens to veto any resolution of the United Nations Security Council that might impose sanctions against the Arab ruling class in the Sudanese government, whose troops and government-allied militias are perpetrating genocide against Sudan’s black citizens, using Chinese-made helicopter gunships based at airstrips maintained by Chinese oil companies.

Until China sees its economic interests in Africa as tied to the continent’s political development, such horrors will continue. Africa’s economy may grow, but Africans will continue to suffer.

Sanou Mbaye is a Senegalese economist and a former member of the African Development Bank senior management team.

Another of our Wednesday rendezvous with Africa... We will be looking at how former British colonies have fared in comparison to their francophone counterparts. Part of our tribute to 50 years of … END_OF_DOCUMENT_TOKEN_TO_BE_REPLACED