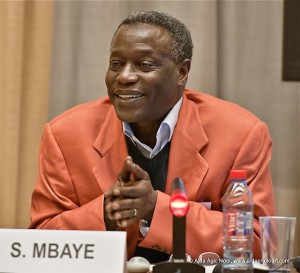 Sanou MBAYE is a London-based Senegalese development consultant and a former senior official at the African Development Bank (ADB). Mbaye was the ADB Chief of the Disbursement Division based in Abidjan, Côte d’Ivoire from 1987 to 1990 and then the Principal Finance Officer based in London from 1990 to 1994.

During his tenure at the Bank, Mbaye had witnessed how the ill-suited ready-made projects and structural adjustment programmes advocated and financed by the international financial institutions for Africa’s development have instead increased debt, deteriorated public finance, and caused famine and civil strife in the region.

Mbaye left the Bank in 1995 to become an outspoken critic of the unfettered economic liberalisation which was wreaking havoc on the economies and the people of Africa as a columnist for The Guardian, Le Monde diplomatique, and Project Syndicate and a guest speaker in universities such as Columbia, Oxford, LSE, SOAS, Berlin, Frankfurt, Montreal, CAD Dakar, Beijing and in civil societies forum.

Mbaye has equally been for the last two decades at the forefront in the struggle to remove the Franc CFA, a colonial currency relic that France’s leader, General De Gaulle, created in 1945 as the legal tender in his country’s African colonies. Freely convertible and transferable to France, pegged to then to the French franc and now to the euro at a ridiculously overvalued exchange rate, the franc CFA allows France to exercise a total control of the economies of its former African colonies in spite of the so-called independence that De Gaulle granted to these countries in 1960. France still keeps holding in a special account in its Treasury billions dollars of the foreign-exchange reserves of these countries as the underwriter of the franc CFA. The current scheme breeds structural fiscal deficits, excessive reliance on imports, endemic corruption, money laundering, narcotics trafficking, and massive capital flight.

China’s significant intrusion into Africa’s economic landscape is another theme on which Mbaye has written extensively. He is among the authors of the book: “Chinese and African perspectives on China in Africa” published in 2010.

He has published his views in his 2009 book, “L’Afrique au secours de l’Afrique” (‘Africa to the Rescue of Africa’).

Mbaye is currently advocating the creation of a diaspora investment bank to streamline 1migrant remittances as a source of development financing.

Mbaye is a graduate of the Burgundy School of Business in Dijon, France where he studied finance.

Born in Senegal, he holds dual Senegalese and French citizenship.

Another of our Wednesday rendezvous with Africa... We will be looking at how former British colonies have fared in comparison to their francophone counterparts. Part of our tribute to 50 years of … END_OF_DOCUMENT_TOKEN_TO_BE_REPLACED

The decades when the continent couldn’t raise major funds on ordinary commercial markets are over, but there are still worries about over-indebtedness. by Sanou Mbaye The nations of sub-Saharan … END_OF_DOCUMENT_TOKEN_TO_BE_REPLACED

Nowadays, African countries are wooed because they are perceived as the spearheads of the world economy. The Economist, the English weekly newspaper, predicts that in the next five years, seven out of … END_OF_DOCUMENT_TOKEN_TO_BE_REPLACED