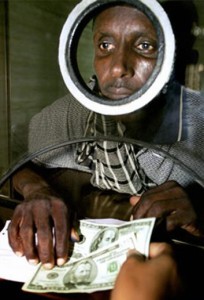 There is something familiar about the tide of news about sub-Saharan Africa’s increased economic hardship in the face of the worst world financial crisis and economic downturn for decades. The tide flows through exactly the same conclusions of the UN and other multilateral Institutions, academics, NGOs and Civil Society experts on Africa’s issues. They stretched to include the most alarming warnings about increased poverty, malnutrition, civil strife and death. The media spread the news in the public domain, targeting human consciousness the world over with graphic illustrations of lingering brutalities and despair in places such as Guinea and the Democratic Republic of Congo.

Yet, African countries, locked out of borrowings on capital market for most of the past five decades, have been spared the twin woes of financial turmoil and economic downturn. The economies of the continent experienced a slowdown, but not a recession. According to Mc Kinsey & Company, Africa was the third contributor to world economic growth in 2009 after China and India.

Throughout the eighties and the nineties these countries went through drastic structural adjustments imposed by the Bretton Woods institutions and their western mentors. Official Development Assistance (ODA) has been their sole long-term source of financing. Worse, the development model spearheaded by these institutions which was based on producing and trading natural resources without any further domestic processing whatsoever, was doomed. This situation, however, is currently changing. Several African countries have received ratings from credit agencies which opened up world financial centres to them. In some cases, these ratings have proved higher or equivalent to those of countries such as Turkey or Argentina. Stock exchanges are being established across the continent.

Furthermore, the economic assertiveness of countries such as China, India and Brazil has provided a platform for increased exports and the inception of a model of cooperation based on trade, investments and technology transfer rather than “aid”. For China alone, trade with Africa increased from 10 billion dollars in 2000 to 107 billion in 2008, and billions of dollars are being invested in sectors such as oil production, mining, transportation, electricity production and transmission, telecommunications, and other infrastructure projects.

The combination and convergence of these developments have drastically improved the macro-economic framework of African countries. Inflation has been halved since the nineties, exchange reserves have increased 30%. Public finances surplus represented 2.8% of GDP in 2008 compared to a deficit of 1.4% for the period 2000-2005. Savings rates stand between 10 and 20% and the level of external debt has decreased from 62,4% of GDP in 1998-2001 to 23,1% in 2005-2007. Return on investment averages 35%.

Since 2000, sub-Saharan African countries have achieved economic growth of 5 to 7%. Many factors have contributed to fuel this upturn. First, there is the appreciation of commodity prices fuelled by the demand from emerging markets. Another lever of economic growth relates to the rural exodus and the urbanisation that stemmed from it, giving birth to a dynamic informal sector. Improved governance, an increase in food production, inter-regional trade, debt cancellation, a better use of ODA funds, and thriving telecommunications and housing markets, are among the other engines driving economic growth in the region.

But migrant transfers from the African Diaspora stand out as the most significant contributing factor to economic growth in the region. A study commissioned by the Rome-based International Fund for Agricultural development (IFAD) indicates that more than 30 million individuals living outside their countries of origin are contributing every year more than 40 billion dollars in remittances to their families and communities back home. For sub-Saharan African countries, migrant remittances increased from 3.1billion dollars in 1995 to 18.5 billion dollars in 2007 according to the World Bank, representing between 9% to 24% of GDP, and 80% to 750% of ODA, underscoring the social, economic and financial importance of migrant remittances in recipient countries, the migrants representing, de facto, their first fund providers.

In the remittances market, migrant behaviour is essentially dictated by the regulatory environment, the quality of products and services offered by banks, money transfer companies (MTC), micro-finance institutions (MFI) and informal operators in relation to speed of service, collection times, cost, security, coverage and accessibility of network. In this respect, there are three different strategies in place in Africa. The Anglophone strategy is focused on freeing up the market by inciting competition, relaxing regulatory constraints for non-bank operators, offering financial incentives, encouraging the development of technical and financial innovations, and stimulating collaboration among market players. This approach, adopted also by Italy, contributes to reducing costs, removing barriers to free competition, and generating an increase in overall volume of funds for beneficiaries.

The Hispanic approach emphasises scaling up the involvement in banking of migrants, proposing a range of banking services available in both the country of origin and the host country, developing products of specific interest to the migrant, and charging as low a commission as possible on foreign transfers. This approach, widely developed by Morocco and the Portuguese-speaking world, is epitomised by a policy of zero commission initiated by the partnership between the Spanish bank Santander and its Moroccan counterpart Attajariwafa Bank, which remains the best international reference.

The Francophone approach works on two brands of monopoly. The first is enjoyed by Western Union (WU), the US Money Transfer Company which controls up to 90% of the total formal transfer volume within the Franc Zone. WU is characterised by the cost of the money transfers fees it charges, as high as 25% on transfers to African countries compared to an average world benchmark of 5%. WU has required that Franc Zone countries should sign exclusivity agreements that prevent foreign exchange bureaux, post offices and micro- finance Institutions (MFI) from carrying out money transfers and expanding their network.

The second overwhelming dominating factor in the Franc Zone 1 is exercised in the banking sector at two levels. First, there is the right of veto granted to France within the board of directors of the two central banks of the Franc Zone – BCEAO & BEAC -. Second, two French commercial banks, BNP-Paribas and Société Générale exercise a quasi-monopoly on the dictation of lending programmes. Their main activities are centred on short-term financing of trade, and consumption, catering to the needs of their customers, especially governments, public and private companies and the elite. So far, all other banks operating in the area have adopted the same practice instead of enhancing competition by lowering costs. Although realising handsome profits from their trade and constantly running a surplus of liquidities, these banks have contributed little to the productive investments desperately needed by these countries. This explains the high level of the un-banked population and the local entrepreneurs’ lack of access to financial services. The less the market is subject to concurrence, the less the benefiting households are “bankarised”, and the more these transfers transit through informal channels. As a rule, it has been observed that the volume of informal transfers is inversely proportional to the level of “bankarisation” of benefiting households.

In these times of financial turmoil, workers’ remittances are being recognised for their contribution to the economic health of the region, as well as for their vital importance to recipients. For obvious historical and linguistic reasons, France remains the main host country for migrants from the its former colonies , including the Comoros and Madagascar. Notwithstanding the increasing importance of new corridors from Italy, Spain and the United States, in absolute terms the largest share of remittances still originates from France.

There is, therefore, in the Franc Zone a real need for the establishment of a medium and long term financing institution for leveraging the development impact of migrant remittances in converting these funds to medium and long-term productive investments generating added-value, wealth, jobs, economic growth, and development. It will meet the needs of the Diaspora, benefiting not just households, but the Franc Zone States themselves, in terms of access to banking services, mortgages and productive investments, insurance products, co-development, pension plans, technical assistance, and modernisation of the informal sector. It will enable competition, and restructure and fructify migrant savings. It will also contribute to the creation of hundreds of thousands of jobs in Africa, Europe and the USA in this age of economic and financial difficulties.

The creation of such an institution has to be given an overriding priority. Its establishment, combined with strategic partnerships with banks, post offices, microfinance institutions, mutual savings and credits, money transfer companies and financial institutions in the Franc Zone and the rest of Africa, will act as a trigger for reforms within the Franc Zone, which is characterised by the common fixed exchange rate policy adopted by its member-countries. They abandoned, in 1960, the federal structure that bound them during French occupation, and erected trade barriers between them. However, they still maintained their common currency, the CFA franc, the legal tender in the former African French colonial empire.

The CFA franc is now pegged to the euro at a highly overvalued fixed exchange rate. On the other hand, the euro exchange rate fluctuates and of late has not stopped appreciating against the dollar. With the bulk of their exports priced in dollars and their imports priced mainly in euros, trade imbalances and fiscal deficits are rife within the Franc Zone. Still more appalling, the CFA franc is freely convertible in hard currency, and its convertibility is guaranteed by France on condition that the sixteen African member-states of the Franc Zone surrender to the French Treasury 65% of their foreign exchange reserves to be lodged in an arcane “compte d’operation “. A foreign exchange control enacted in 1993 restricted the free flow of capital to France.

On the other hand, the CFA franc issued separately by the two Central Banks of the Franc Zone are not interchangeable, which makes it difficult for their member-countries to trade, let alone to achieve any meaningful economic integration. This has transformed the Franc Zone into a preferential economic area for the French State and businesses, and has led to massive capital flight, loss of competitiveness and gargantuan official corruption. The controversy about France’s role in the present crisis that continues to plague the economies of these countries is likely to be exacerbated by the prospect of a prolonged period of economic stagnation in the US, the UK and the euro zone.

The Franc Zone countries are missing out on the first signs of economic rejuvenation in Africa for decades. And, as the present emerging markets will keep scaling up the highly value-added ladder of their service industries, the region will be bound to be the next frontier for manufacturing delocalisation and investments with its low carbon emission, its carbon-absorbing CO2 tropical forests – second only to the Amazon – and its limitless potential of solar and hydro-electric energy supply.

Ironically, at a time when most Franc Zone member-countries are about to celebrate 50 years of independence from France in 2010, there is an urgent need to reform, especially in the areas of exchange rate, currency convertibility and military “cooperation”, the agreements signed in 1962 between France and its former African colonies and still referred to as “the colonial pact”.

*Sanou Mbaye, a former member of the senior management team of the African Development bank, is a Senegalese banker and the author of “L’Afrique au secours de l’Afrique”, Editions de l’Atelier Paris 2009 (Africa to the rescue of Africa).

Another of our Wednesday rendezvous with Africa... We will be looking at how former British colonies have fared in comparison to their francophone counterparts. Part of our tribute to 50 years of … END_OF_DOCUMENT_TOKEN_TO_BE_REPLACED

The decades when the continent couldn’t raise major funds on ordinary commercial markets are over, but there are still worries about over-indebtedness. by Sanou Mbaye The nations of sub-Saharan … END_OF_DOCUMENT_TOKEN_TO_BE_REPLACED

Nowadays, African countries are wooed because they are perceived as the spearheads of the world economy. The Economist, the English weekly newspaper, predicts that in the next five years, seven out of … END_OF_DOCUMENT_TOKEN_TO_BE_REPLACED

Africa’s Diaspora to the Rescue
Next