You are here : Accueil » Economy » Currency war : the stakes for Africa 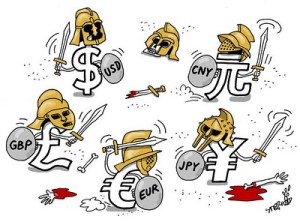 A weaker exchange rate makes a country’s exports cheaper, potentially boosting a key source of growth for economies battling to find growth, as they emerge from the 2008-2009 credit crunch and economic crisis suffering from chronically deficient demand. Global imbalances are on the rise again, as is the risk of protectionism. Western countries are battling to keep their exchanges rates low in order to export their way out of trouble. It is against this background that the US accuses China of intentionally undervaluing its currency to support its domestic industry. All parties concerned, including western and major developing economies such as South Africa, Brazil and South Korea, have failed so far to agree on the issue.  The situation could even lead to an “international currency war”.   What does this herald for African countries ?

If history is any guide, we might well look into previous currency conflicts to gauge the future.  In the 1930s, currency wars led to competitive devaluations, protectionism, and inflation running out of control, economic collapse, the rise of Hitler and national-socialism in Germany, and eventually the Second World War. Africans were drafted in their thousands to fight along the allied forces against the Axis armies.  Many of them died or were mutilated. When they returned home, some of those veterans who survived were slaughtered by the French army in the infamous “Thiaroye Camp” bombardment in Senegal, for having dared to claim equal benefits with their European comrades in arms. Africa’s consolation prize came with the political awakening, the fight for freedom, and the independence that ensued in the late ‘fifties and early ‘sixties.

Post-war international euphoria did not last long before another currency conflict struck. In August 1971, the US president, Richard Nixon, imposed the “Nixon shock”, levying a 10 per cent import surcharge and ending dollar convertibility into gold. Both events reflected not only the US desire to depreciate the dollar but also to establish it as the sole world currency reserve. This is how the debt-economy was born in which money supply is closely tied to credits allocated to states, companies and individuals. This debt-economy was compounded and universalised by the “Big Bang” of the 1980’s, the fall of the Berlin Wall in 1989, the globalisation of economic liberalisation, and the repealing in 1999 of the “Glass-Steagall act” which was enacted in 1933 to prevent commercial banks from investing in risky financial paper, such as the stocks, futures and derivatives that put Wall Street into big trouble in September 2008. Cheap money flooded the world, except into African countries which, with the exception of white-ruled South Africa and Northern Rhodesia (present Zimbabwe) were locked out of capital market borrowings, while being addicted to the “aid industry”. They became saddled with unproductive and unsustainable level of debt. Here also, their consolation came when, barred as they were from financial market activities, they escaped nearly unscathed from the woes of the credit crunch and the worldwide downturn that ensured.

Presently, the policy of quantitative easing (QE) adopted by the USA, the European Union and Japan – printing hundreds of billions of dollars to stimulate their economies – is flooding emerging market economies with volatile foreign capital as investors search for higher yields given that official interest rates are already touching zero in the QE proponent countries.

Officials from countries ranging from Singapore to Colombia have issued warnings over the strength of their currencies. Several countries’ central banks, including South Korea, Brazil, Switzerland and Taiwan have been intervening unilaterally to prevent the appreciation of their currencies. In South Africa, the continent’s biggest economy, capital inflows attracted in part by an interest rate higher than in much of the Western world, induced a rally in the rand which reached R6.76 against the dollar in October, its strongest level in almost three years, undermining key export-led industries. The South Africa Reserve Bank might be obliged to intervene in the foreign exchange market to soak up capital inflows. This would be a costly path to walk, with little prospect of offsetting strong capital inflows destabilising its economy.

The CFA franc is still more vulnerable. The franc zone, which gives France control of 65 per cent of the African member-countries’ foreign-exchange reserves deducted directly from their oil, gold, cocoa, coffee and other commodities exports earnings will be a first choice for hot money inflows. The currency is freely convertible in hard currency at a grossly overvalued parity pegged to the euro. A foreign exchange cover of 110 per cent, combined with soaring interest rates, low inflation and free capital movement, fuels capital flight to the benefit of French private companies such as Bouygues, Areva, Total, Sonatel, Air France, BNP Paribas (BICI), Société Générale, etc.  This capital drain is reinforced by a foreign exchange control enacted in 1993 that restricts free capital flows to France. Moreover, the franc zone is particularly attractive to speculative capital inflows. Speculators transfer huge amounts of money to high-interest-bearing local deposit accounts, collect their tax-free gains every three months, and take the no-risk plunge again.

The brewing currency conflict is all the more unwelcome when one considers that the continent is currently enjoying particularly good economic omens. Indeed, according to McKinsey & Company, in 2009 Africa was the third-largest contributor to world economic growth, after China and India. The prestigious global management consultancy has credited the continent as delivering the highest rate of return on foreign investment of all developing regions.

Africa’s improved macroeconomic conditions and microeconomic reforms, intended to create a better business climate are part of the reasons for this surge in growth. Inflation has been halved since the 1990s. Foreign-exchange reserves have increased by 30 per cent. Public finances showed a 2.8 per cent-of-GDP surplus in 2008, compared to a 1.4 per cent-of-GDP deficit in 2000-2005. Savings rates are between 10 per cent and 20 per cent, and external debt has decreased from 110 per cent of GDP in 2005 to 21 per cent in 2008. Since 2000, sub-Saharan African countries have achieved average economic growth of 5-7 per cent.

Africa’s growing young population is a key asset. There is rapid urbanisation everywhere in Africa with 40 per cent of Africans already living in cities. This has created a dynamic informal sector unconnected to the modern economy. Although marginalised by African officials, this cash-based economy is a major contributor to the continent’s productive capacity. It employs more than 90 per cent of the workforce and is home to 75 per cent of retailers.

By 2015, Africa will be the only continent where the working age percentage of the population is still growing. By 2050, Africa will number some two billion inhabitants. There will be 1.1billion Africans of working age, more than in either China or India, and the number of households with earnings over $5,000 – considered a threshold for consumption spending – will rise from 85 million to 128 million in the next decade. The combined GDP of the largest 11 African economies should reach more than $13 trillion, surpassing Brazil and Russia.

Agriculture is another key African asset. The scrambles for large-scale purchases and leases of hundreds of thousands of hectares farmland in the region have made press headlines in a flurry of media reports across the world. And, there is no doubt that the opacity and the unfavourable conditions surrounding part of these deals are causes for concerns.  A failed attempt to lease 1.3 million ha has led to public unrest and a change of government in Madagascar.  However, the fact remains that the only answer to global rising food prices, “food riots” and food security concerns in most part of the world can only be met by long term investment to harness Africa’s huge agricultural potential, still barely exploited.

Nigeria, with possibly a population of 180 million or more, could, if everything falls into place, be bigger than any of Canada, Italy or South Korea. Kenya, the largest economy within the Community of East Africa, now fully economically integrated, will benefit from a much larger target market with neighbouring countries – Uganda, Tanzania, Rwanda and Burundi – for its leading companies such as banks and breweries. The Kenyan government has launched its most ambitious investment program ever in infrastructure, including energy projects and construction of roads and railways. Good economic growth is expected now that the referendum on the new constitution was successfully conducted.

Moreover, developing emerging economies such as Brazil, India, and China have provided a platform for increased exports and the inception of a cooperation model based on trade, investment, and technology transfer, rather than “aid.” China, particularly, has played a leading role in this turnaround. It has struck infrastructure-for-resources bargains across Africa over the past decade, as it seeks crude oil, minerals and metals to fuel its breakneck economic expansion. China-Africa trade alone increased from $10 billion in 2000 to $107 billion in 2008.

The annual flow of foreign direct investment rose from $9-billion in 2000 to $62-billion in 2008 – relative to GDP almost as large as the flow into China. Investments are being made in banking, oil production, mining, transportation, electricity generation and transmission, telecommunications, and other infrastructures, boosting employment and growth. Still, when oil and gas investments are stripped out, South Africa, the continent’s industrial and financial centre, is now the largest investor in the rest of the continent, not China, or the US.

This is the bright prospect that the present currency sabre rattling is in danger of jeopardising. John Connally, Nixon’s secretary of the Treasury, famously told the Europeans that the dollar “is our currency, but your problem”. In September 1985, the governments of France, West Germany, Japan, the US and the UK met at the Plaza Hotel in New York and agreed to push for depreciation of the US dollar. With its export competitiveness damaged by a soaring yen and pressured by the US to reduce its current account surplus, Japan never recovered from the huge monetary expansion that followed and the consequent bubble that helped deliver 20 years of economic deflation, the so-called “lost decade” of the 1990s. Once a world-beater, Japan fell into prolonged doldrums.

China has a keen sense of its history and takes a long-term view of its own development. It is unlikely that it will follow in the footsteps of Japan. Furthermore, in spite of being the world’s second economy, China remains a developing country in terms of per capita income. With its huge population and immense foreign exchange reserves, it still has considerable scope to expand domestic demand in a more timely way. Africa should apply the same long-term logic to its development, take measures to correct present imbalances, and implement the right environment for sustainable growth. This will depend on stable macro-economic policies focusing on economic integration, food security, low inflation, reduced debt, stable governments, enhanced rule of law, improvement of basic levels of health and education, spread of mobile telephony and internet use, and last but not least, eradication of corruption.

With an international currency war on the horizon, Africa is being caught in the cross-fire. From past experience, she knows very well that when elephants fight, she is likely to be trampled.  However, she might find comfort in the fact that when the world’s major economies are in trouble, wary investors find solace in ‘refuge values’ like gold, silver and other commodities such as oil and base metals in which Africa abounds.

Another of our Wednesday rendezvous with Africa... We will be looking at how former British colonies have fared in comparison to their francophone counterparts. Part of our tribute to 50 years of … END_OF_DOCUMENT_TOKEN_TO_BE_REPLACED

The decades when the continent couldn’t raise major funds on ordinary commercial markets are over, but there are still worries about over-indebtedness. by Sanou Mbaye The nations of sub-Saharan … END_OF_DOCUMENT_TOKEN_TO_BE_REPLACED

Nowadays, African countries are wooed because they are perceived as the spearheads of the world economy. The Economist, the English weekly newspaper, predicts that in the next five years, seven out of … END_OF_DOCUMENT_TOKEN_TO_BE_REPLACED

CHINA-AFRICA COOPERATION – THE STAKES
Next 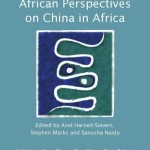 Chinese and African Perspectives on China in Africa