You are here : Accueil » Economy » CAPITALISM IN CRISIS

Marxist economics made the withering away of the state its ultimate goal. However, it is the unabated liberalisation of the world economy, which is translating the old socialist dream into a disquieting reality. It needed the combination of three ingredients to make this twist of history possible.

First, there was Nixon’s decision in 1972-73 to end the dollar-gold link, which led to the official death of the gold standard era. From there on, money supply was determined by the volume of credits created to finance state, corporate and private borrowings. Within such a context it did not take much time for central banks to lose monetary control. Their newly acquired independence, restricted mainly to set interest rates to suit the market, serves only to disguise their impotence.

Second, came the collapse of communism and the invention of the microchip.The technological breakthrough in computing and communication which the microchip entailed combined to the relentless zeal of such ideologues as Ronald Reagan and Margaret Thatcher in spreading the new ultra liberal doctrine lifted the last barriers of the globalisation of the capital markets.

Third, in spite of pitiless privatisation programme, the budget deficits of countries around the world continued to increase. The uncompromising stand by the IMF and the World Bank in favour of reducing these deficits regardless of human casualties had rendered states hostage to the capital markets to satisfy their ballooning public service borrowing requirements. 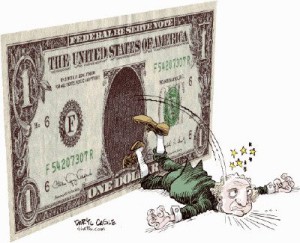 But such prominence accorded to the capital markets is a mixed blessing. Indeed, an unlimited amount of liquidity born out of unchecked money supply is an irresistible incentive for speculation. As a result, economic growth is no longer the automatic route to job creation. It is, in fact, quite the opposite. Prosperity in these circumstances stems from short-term economic activities fuelled by gigantic take-overs, acquisitions and mergers, and foreign exchange and derivative trading prone in fact to generate job losses. Buoyant stock market and increased rate of unemployment goes hand in hand. Long-term economic productive activities have become a rarity. In the developed world, the economic cycle has been turned upside down with a domineering service industry well ahead of a shrinking manufacturing sector and a skeletal agricultural sector.

Furthermore, since the amount of exposure of the market operators is much bigger than their own capital resources, and given the intertwined nature of their lending programmes, substantial losses on the part of any of the big players are a threat to the stability of the world financial system. The deepening economic and financial chaos in Asia, Russia and Latin America, the looming recession in the western world and the impotence and incompetence displayed by the IMF in dealing with these crises give us a glimpse of the tremors still to come. That has prompted the Financial Times to become an advocate of capital controls and the New Statement to advise reverting to Keynes. Contemplating such measures is an indication of the level of anxiety that has been reached. However, theses proposed therapies run against the economic realities of the developed world.

Financial flows are mostly dictated by hedge funds whose corporate culture is a mixture of greed and arrogance. They have the power to humble the most powerful economies in the world. In such a context, capital controls are irrelevant.

As for Keynes, his policies of low interest rate, long term investment under the stewardship of the state and full employment have become a thing of the past in the west since the late 70s. How would he feel today to see that his low esteem for gold as a money anchor has led the policies that he advocated to be relegated to the museum of relics? In that respect, it is worth reminding that the right to convert money into gold has, throughout history, provided the financial system with a firm monetary anchor to the dislike of politicians and professional speculators. The formers prefer paper currency, much more flexible when they need to fight a war, win an election or finance a demagogic programme. The latter thrive on the instability inherent to the printing of paper money tied to nothing but credits. What is less comprehensible is that, an economist of the stature of Keynes who, with Marx, are the only individuals who have associated their names to an economic doctrine, came to consider gold a “barbaric relic” and resorted himself to speculation to make his fortune.

No wonder that in such a world, the speculative tide has since gained its own unstoppable momentum and a life of its own. No remedy can be contemplated before a crash of immense magnitude occurred. This is the condition, sine qua non, as history has taught us, which will allow states high jacked by the moneylenders, to revert to hyper inflation to wipe out their debts and to authoritative measures to restore their lost sovereignty. It is only then, that meaningful reform can be contemplated.

In the meantime, Africa is emerging as the last unsaturated piece of land, where unfettered capitalism can still prosper and buy a further lease for its own survival before the beast dies in a global meltdown. In a sense, this is a return to square one at the very place where modern capitalism started in a gruesome accumulation of human capital. This time around, the multinationals will call the tune. Unlike the Europeans who exploited the riches of Africa without bothering to develop the Continent, the Americans recipe is trade and development. The Marshall Plan was the trademark of such a strategy. After the rebuilding of post war Europe and Japan with American money, goods and services, they applied it to other countries in Asia and Latin America. Because of the cold war Africa had remained the hunting ground of the Europeans. Globalisation has changed all that. With their gold, diamond, oil and all the other wealth of the region, the Africans are solvable. But they are also deeply poor, lacking everything. That means that the American banks and industrialists can team up to provide the Sub-Saharan countries with all the glittering traps of modern capitalism made in America. Highways, airports, railways, skyscrapers etc. can be built. Cars, aeroplanes, locomotives and all other sorts of goods and services will be provided or produced locally in joint ventures with local entrepreneurs. Borrow and consume to the point of indigestion is the paradigm. Nothing would have been wrong with such a scenario if injustice, inequalities and the loss of the moral fabrics of societies were not the price that naked capitalism has extolled wherever it has been implemented.

But, for the last five hundred years, the so-called Dark Continent has proved its resilience to the predatory and materialistic values of the western world. It survived the evils of the European and Arab slave traders. The colonisers have been defeated. The brutal, incompetent and corrupt leaders of the post independence era such as Mobutu and Abacha are disappearing. The days of those remaining are numbered. And soon or later the mountain of debts that the financiers of the west have been lavishing on them to prop up their regimes while benefiting from the lucrative contracts of the industry of “aid” will have to be cancelled one way or another.

However, there is no disguising of the horrendous cost that the black people had to pay and are still paying for their sustained tenacity in the face of adversity. Famine, racism, abuses, humiliation and deaths have been they ordinary lots. Their scars and their deeply bruised self-esteem have been a fertile ground for divisions and self-destructive violence of unimaginable scale. All those countries that were involved in the sinister episode of slave trading count now a sizeable number of blacks people among their citizens. Today, they are the disposable and despised minorities whose members can be killed in total impunity as the case of Stephen Lawrence in Great Britain demonstrated. In the United States, one-eighth of all black males between the ages of 25 and 34 are in jail and three out of five black American households with children are headed by a lone mother. But against all these odds, we succeeded nonetheless to preserve our identity, living at the periphery of the predatory, promiscuous and materialistic western world.

However, resistance is no longer sufficient. The time has come to reunite what the Europeans have disunited in 1881, in Berlin, in what Leopold II, the King of the Belgians, referring to Africa, called the sharing of the cake. We will need to dig even deeper in the wealth of our social capital to revive the values of civilisation that we gave to the world at the very beginning of history before they were squandered at our expense.

Another of our Wednesday rendezvous with Africa... We will be looking at how former British colonies have fared in comparison to their francophone counterparts. Part of our tribute to 50 years of … END_OF_DOCUMENT_TOKEN_TO_BE_REPLACED

The decades when the continent couldn’t raise major funds on ordinary commercial markets are over, but there are still worries about over-indebtedness. by Sanou Mbaye The nations of sub-Saharan … END_OF_DOCUMENT_TOKEN_TO_BE_REPLACED

Nowadays, African countries are wooed because they are perceived as the spearheads of the world economy. The Economist, the English weekly newspaper, predicts that in the next five years, seven out of … END_OF_DOCUMENT_TOKEN_TO_BE_REPLACED

Why the CFA franc must go
Next

Sub-Saharan Africa on the Sidelines, A false economic dawn?