You are here : Accueil » Economy » Should Africa Follow the EU Model ?

The African Union, which replaced the Organization for African Unity (OAU) in 2002, is trying to reproduce the European Union’s institutions and ways of acting. But copying the EU blueprint means that nothing has been learned from the past and that nothing is being done to avoid the pitfalls Europe has endured.

The biggest flaw in the EU model has been its reliance on a bureaucratic road to unity. In Africa, such an approach is particularly noxious because there is no real commitment on the part of African rulers to unity, which offers the prospect of creating a bureaucracy with no mission but to waste Africa’s scarce resources. It will invariably recycle retired and failed politicians and be a way station for vast patronage.

Of course, Africa needs unity. The go-it-alone strategy practiced by most African countries has left them vulnerable to the whims of former colonial powers determined to perpetuate an international division of labor that assigns to Africa the role of supplier of basic products and raw materials, rather than skilled, well-paid labor.

So unity is needed to rebuild Africa. But that unity must be built step by step, with the primary focus on increasing regional trade within Africa. This should be followed by a determined strategy to end Africa’s position as the “ghetto continent,” one used by the industrialised countries–in collusion with most African rulers–as a dumping ground for obsolete products. Africa must cease being a region to be ransacked, burdened with ill-considered debts by the IMF and World Bank, and so left with institutionalised famine, lawlessness, and horrendus corruption.

If true African unity is to emerge, Africa’s rulers must be committed to it, not just in words, but by deeds. They could begin that long process by taking the following steps:

The AU must secure an AAA bond rating in order to tap international capital markets on the most favorable terms, which includes issuing bonds on African exchanges. Such a scenario will be possible only with the involvement of the UN Security Council, which might consider running a scheme based on the Iraqi oil-for-food program. This time, the UN would earmark part of the export revenues of any given AU member for specific and defined programs and budget contributions. A zero tolerance policy must be applied for arrears on contributions.

The AU will also have to keep an eye on the abuse of state funds by African rulers and local elites. An entirely new financial culture needs to be implemented to eliminate corruption, and this will require that Africans monitor other Africans.

But clean finance will only be possible with clean politics. So the AU should set criteria and create a surveillance system for democratic elections across Africa. Suitable control systems should be put in place to stop and correct any failure to meet the established rules by any means necessary, including suspension of membership or exclusion of culprit countries. Here the AU should look to Europe, which began its process of unification with a mere six highly committed members. The quality, not quantity, of member states is what matters.

The role of the AU should extend to cultivating ways to involve the private sector in restructuring both Africa’s economy and its politics. Here the international community will have to help, for just as Southeast Asia’s economies needed some protection for their infant industries, so Africa’s may also need a brief respite from the whip of the global market during the first stage of building the AU.

This is not a call for total protectionism; the AU’s members should compete fiercely between themselves during this stage. Speculation on Africa’s basic products and raw materials, which has driven down prices for most commodities over the last four decades, might be addressed by creating a mechanism that ties, for an agreed time, the prices of these items to those of industrial goods and services.

A program for African renewal along the lines outlined above offers the best hope for creating stability, new jobs, and establishing democracy in a continent that desperately needs all three. Africa’s unity must become more than a slogan if Africa is to renew itself and prosper.

Another of our Wednesday rendezvous with Africa... We will be looking at how former British colonies have fared in comparison to their francophone counterparts. Part of our tribute to 50 years of … END_OF_DOCUMENT_TOKEN_TO_BE_REPLACED

The decades when the continent couldn’t raise major funds on ordinary commercial markets are over, but there are still worries about over-indebtedness. by Sanou Mbaye The nations of sub-Saharan … END_OF_DOCUMENT_TOKEN_TO_BE_REPLACED

Nowadays, African countries are wooed because they are perceived as the spearheads of the world economy. The Economist, the English weekly newspaper, predicts that in the next five years, seven out of … END_OF_DOCUMENT_TOKEN_TO_BE_REPLACED 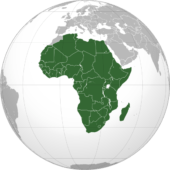 The African Union : A need to go back to the drawing board
Next

How the French Plunder Africa