You are here : Accueil » Economy » How the French Plunder Africa 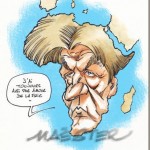 In exchange for France guaranteeing the CFA franc’s convertibility, these countries agreed to deposit 65% of their foreign exchange reserves in a special account within the French Treasury and granted to France a veto over the franc zone’s monetary policy whenever this special account was overdrawn. These decisions have had devastating consequences for forty years.

The bulk of the CFA franc money supply comes from trade between France and its African allies. As a result, the franc zone’s basic features have always been scarce money and high interest rates. On the other hand, in line with IMF and World Bank structural adjustment programs, strict budget discipline has kept inflation low–as if further belt tightening in the name of price stability was the right policy priority in desperately poor countries hit by decades of depressed demand.

Commercial banks are awash with these volatile short-term speculative funds, which they lend to governments on the most stringent conditions. The banks and speculators reap handsome gains, governments are overburdened with unsustainable commercial debts, the domestic productive sector is starved of medium- and long-term financing, and most people remain mired in appalling poverty.

Capital flight, meanwhile, stems from free transfer of profits, debt payments, and the propensity of the elite to exile their assets. This massive hemorrhage of foreign currency is channeled exclusively to France, thanks to a capital control it put in place in 1993. As a result, some of the poorest countries in the world are financing part of the French budget deficit.

The only rational reason for the CFA franc’s existence is connivance between France and the governing elites of its former colonies in order to plunder the franc zone states. Even the common currency’s beneficial effects on trade among member countries were nullified by the paradoxical decision taken by the former sub-Saharan French colonies to dismantle the federal governmental structure and the single market of colonial times and to erect trade barriers in their place.

As though all of this were not bad enough, the CFA franc’s exchange rate, which had remained unchanged since 1948, was devalued by 50% in 1994. What better time–from the prospective of foreign investors, that is–to undertake a vast privatization of state assets? Under the auspices of the IMF and the World Bank, lucrative sectors such as energy, telecommunications, water supply, and banks were sold off at knockdown prices to western companies.

So the end result of the partnership between France and its former African colonies has been spectacularly lopsided. France has secured a vast market for its products, a steady supply of cheap raw materials, repatriation of the lion’s share of local savings, unrivaled political influence, a strategic presence with military bases occupied free of charge, and the certainty that it can rely on its African allies’ diplomatic support. But for the Africans, the partnership has meant weak trade performance, tight money, high interest rates, massive capital flight, and mountains of debt whose repayment prevents higher investment in education, training, health, food production, housing, and industry.

This arrangement’s negative effects extend, moreover, to the entire African continent. At the political level, France and its allies opposed the concept of a continental government advocated in the late 1950’s and early 1960’s by the likes of Nasser and Nkrumah. They helped block the project and establish the notoriously inefficient African club of heads of states, the Organization of African Unity (OAU), thus setting back the clock of African integration by decades.

When the OAU mandated the Economic Community of West African States (ECOWAS) to promote regional economic and monetary union, France and its allies moved quickly to impede it by spearheading the creation of the West African Economic and Monetary Union (UEMOA) and the Central African Economic and Monetary Union (CEMAC). This partly prevented ECOWAS from emulating the economic performance of it sister organizations, the Southern African Development Community (SADC) and the Common Market of East and Southern Africa (COMESA).

But for France’s African allies, grafting a program of economic integration onto a pre-existing artificial monetary union is delusory and unworkable. Indeed, it has been tearing apart the fabric of these societies ever since so-called independence came in 1960. No wonder that nowadays most of these countries face civil unrest, rebellion, and risk of implosion.

If French Africa is to grow, the franc zone must be dismantled. The euro’s birth provided an opportunity for these former colonies to break free of France’s suffocating embrace. They missed it. Instead, they shifted the peg for the CFA franc to the euro while keeping the same rules, institutions, and mode of functioning. For the citizens of Francophone Africa, this will certainly have tragic consequences.

Sanou Mbaye was an economist with the African Development Bank

Another of our Wednesday rendezvous with Africa... We will be looking at how former British colonies have fared in comparison to their francophone counterparts. Part of our tribute to 50 years of … END_OF_DOCUMENT_TOKEN_TO_BE_REPLACED

The decades when the continent couldn’t raise major funds on ordinary commercial markets are over, but there are still worries about over-indebtedness. by Sanou Mbaye The nations of sub-Saharan … END_OF_DOCUMENT_TOKEN_TO_BE_REPLACED

Nowadays, African countries are wooed because they are perceived as the spearheads of the world economy. The Economist, the English weekly newspaper, predicts that in the next five years, seven out of … END_OF_DOCUMENT_TOKEN_TO_BE_REPLACED