In recent years, China and Africa have formed one of the modern era’s most successful economic and trade partnerships. China benefits from Africa’s oil, minerals, and markets, while Africa benefits from increased trade and investment in infrastructure, health, education, small-scale businesses, and low and medium technologies.

Some Western observers – and some Africans – have condemned China’s involvement on the continent as a new form of colonialism. But such criticism is largely misplaced. The development model that China is facilitating, which combines productive investment and trade with concessional loans and aid, is helping to break the cycle of under-development in Africa – a goal that Western-led development strategies have failed to achieve.

Moreover, African countries are building on their relationship with China to advance cooperation with other emerging markets, including India, South Korea, Turkey, Brazil, and Malaysia. Such efforts have bolstered global demand for commodities, while diversifying African economies and enhancing the productive capacity of domestic suppliers. Today, Africa’s rate of economic growth is second only to Asia’s.

This could just be the beginning. With Africa’s current market of one billion people set to swell to three billion by 2045 – including 1.1 billion people of working age (more than in China or India) – its long-term economic and commercial prospects are reminiscent of China’s when it opened up more than three decades ago.

These developments are motivating American and European investors to rethink their strategies in Africa, prompting a terms-of-trade revival and generating interest in Africa’s expanding regional markets.

But progress has not been evenly distributed across Africa. Some countries – for example, Ghana, Nigeria, Kenya, Ethiopia, South Africa, Rwanda, Uganda, Angola, Mozambique, and Zimbabwe – have benefited substantially from Chinese involvement, and now rank among the world’s fastest-growing economies. But others – including the 14 countries that form the franc zone (12 of which are former French colonies) – lack major Chinese investment, and are missing out on Africa’s economic boom.

The franc zone’s plight is being compounded by distorted and dysfunctional economic and monetary policies. While GDP growth in the African Financial Community (CFA) largely outpaced the rest of Africa in the 1990’s, it has since stalled. Furthermore, the CFA has yet to establish a functional common external tariff, and intra-franc-zone trade stands at a mere 12% of its members’ total exports and imports.

In this context, the decision to retain the CFA franc, a freely convertible common currency that is pegged to the euro at a significantly overvalued exchange rate, is dubious. The current scheme breeds structural fiscal deficits, excessive reliance on imports, endemic corruption, money laundering, narcotics trafficking, and massive capital flight.

Particularly damaging is the $17.7 billion in foreign-exchange reserves that France keeps in a special Treasury account at an interest rate of only 1.5%, thereby guaranteeing the convertibility of the CFA franc, which it underwrites. In other words, France uses African reserves to finance part of its budget deficit at a concessional interest rate.

Meanwhile, French banks charge at least 5-6% interest on the loans that they grant to African governments to finance their budget deficits. With the commercial lending rate at a high of 18%, bank credit to the franc zone’s private sector has dropped to 12.7% of GDP, compared to 36.5% in Sub-Saharan Africa and 78.9% in South Africa, the region’s leading economy.

But neither France’s near-total control of money and credit, nor its strong influence over politics and security, is wholly responsible for keeping the franc-zone countries mired in poverty and instability. By misappropriating public funds for personal use, franc-zone leaders serve as accomplices to France’s institutionalized exploitation of CFA countries and citizens.

Côte d’Ivoire, the franc zone’s leading economy, was a net rice exporter in the early 1970’s, until the country’s elite followed the advice of French expatriates to import rice rather than produce it. With the help of import licensing, then-Finance Minister Konan Bédié earned his first billion CFA francs within a year. Around the same time, Félix Houphouët-Boigny, the former Ivorian president and a figurehead of African independence movements, publicly warned Africans of the risks of keeping their fortunes in Africa.

More recently, Karim Wade, the son of former Senegalese President Abdoulaye Wade, was arrested on suspicion that he amassed a fortune of roughly $1.5 billion during his father’s presidency, when he held senior ministerial positions.

It is time for franc-zone leaders to break the cycle and chart effective national development strategies for their countries. They should begin by pursuing complete emancipation from France, abandoning the CFA franc, and building relations with China, and others, who want to pursue mutually beneficial trade and business with Africa.

Another of our Wednesday rendezvous with Africa... We will be looking at how former British colonies have fared in comparison to their francophone counterparts. Part of our tribute to 50 years of … END_OF_DOCUMENT_TOKEN_TO_BE_REPLACED

The decades when the continent couldn’t raise major funds on ordinary commercial markets are over, but there are still worries about over-indebtedness. by Sanou Mbaye The nations of sub-Saharan … END_OF_DOCUMENT_TOKEN_TO_BE_REPLACED

Nowadays, African countries are wooed because they are perceived as the spearheads of the world economy. The Economist, the English weekly newspaper, predicts that in the next five years, seven out of … END_OF_DOCUMENT_TOKEN_TO_BE_REPLACED

Decolonizing the Franc Zone
Next 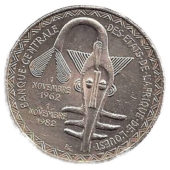