You are here: Home / Economy / Toward an African energy doctrine 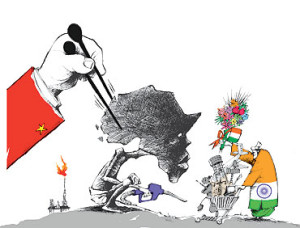 For Karl Marx, there was an historic necessity for States to wither away in anticipation of an idyllic communist society capable of auto-regulating economic imbalances and empowering the masses. The towering revolutionary author of Das Kapital would have been flabbergasted to see his prophecy realised, not under the flagship of communism, but that of the globalisation of the Anglo-American liberal economic model. It is capital market liberalisation, i.e., opening up markets to the free flow of capital, mainly short term, hot and speculative money and not the dictatorship of the proletariat as prophesised by Marx which has rendered obsolete states’ power.

In the convulsed greed-driven world of globalisation reminiscent of the conglomerate model familiar before the 1929 Crash, all safety measures aimed at ring-fencing and regulating all capital market activities as laid by the 1933 Glass-Steagall Act have been repealed. Today’s capital market activities, ranging from raising money for governments, corporate and individual customers to managing pension funds investments and to betting on the level of interest rates or the stock market have become tradeable, and capable of being removed in short order from any corporate balance sheet through financial engineering. Trading in derivatives which by early 2002 was worth $1-1½ trillion is the byword for insurance policies subscribed by banks and other market participants to protect themselves against their exposure going soar. The credit derivatives market reaps huge profits for investment banks, hedge funds and traders while depriving the real economy of substantial amount of productive investment and job creation. No wonder that, in such a “gambling economic culture”, the well-being of the world citizen takes a back seat, with a tiny minority enjoying the riches of the world and the overwhelming majority being reduced to expendable toilers.

No population in the world is spared from the harsh treatment that the proponents of such a system are giving to the world population. Some 40% of the world’s 6.5 billion people live in poverty, and a sixth (877 million) live in extreme poverty. However, the black populations of the world are, nonetheless, the prime victims of globalisation. In the United States, one-eighth of all black males between the ages of 25 and 34 are in jail and three out of five black American households with children are headed by a lone mother. The images of the devastation of the hurricane Katrina in New Orleans in August 2005 beamed on television screens and in the internet all over the world are perfect illustrations of how badly the majority of African-Americans are faring in the United-States.

As for African countries, the politics and the economics of globalisation have stripped them of their assets and natural resources and left them with a debt burden beyond their ability to pay. As a result of these forces, the percentage of the population living in extreme poverty has increased from 41.6% in 1981 to 46.9% in 2001 doubling the number of people living in extreme poverty, from 164 million to 316 million.

On the other hand, in the era of globalisation, there is a correlation between the amount of intra-trade within a region compared to that of extra-trade. Economic groupings in which the former is bigger than the latter have better economic outlooks and more strengthened social fabrics. This is the case for Europe, Asia and increasingly Latin America, particularly among the member states of Mercosur (Argentina, Brazil, Chile, Uruguay, Venezuela, and Paraguay). The opposite is true for those regional groupings in Africa and in the Middle East where total exchanges with the outside world are more important that their intra-regional trade.

As a result, self-centred development strategy, preferably within a regional economic framework, should be given by any country an overriding priority when formulating development strategies in order to counter the destructive forces of globalisation. This is a prerequisite to defending again market fundamentalism and warding off the iniquitous conditions of the international marketplace.

Exports have remained the main driver of growth for ASEAN 10-member countries, contributing to a regional GDP growth of 5.8 percent in 2006. ASEAN foreign direct investment (FDI) flows reached US$ 38 billion in 2005, which was an increase of 48% from the previous year. The outlook for 2006 was also bullish as preliminary data for the first quarter of 2006 indicated that FDI flows had already reached US$ 14 billion, an increase of 90% from the US$ 7.4 billion registered for the same period in 2005. ASEAN drive to move forward the goal of establishing a fully-fledged economic community (AEC) has been underlined by the implementation of its Priority Integration Sector Roadmaps which serves as the catalyst to realise economic integration.

With regard to sub-Saharan Africa, its quest for economic integration has been hampered so far by its historical legacy of artificial and unmanageable inherited colonial boundaries, ethnic antagonisms, the deficit of self-respect of its citizen and an appalling record of leadership failures. To mitigate these handicaps and given the pressing need to address energy crisis and climate change worldwide, it could be strategically advisable to start integrating the economies of sub-Saharan African countries sector by sector starting with the tactically and advantageously important energy sector.

Black Africa is a continent rich in power. For example, two-thirds of the world’s reserves of hydro-electric power are concentrated in Africa. These reserves of thousands of billions of kilowatt-hours represent about half the total of world resources. The Congo River alone holds more than 600 billion kilowatt-hours of annual reserves. The Sanaga (Cameroon) and the Ogooué (Gabon) hold half as much. Technological breakthrough in energy transportation via high-voltage direct current as opposed to alternating current made it feasible to transport electricity over long distances without incurring great losses (loss in transport being only about 3% per 1,000 kilometres).

Carbon-free hydroelectric power must be the right choice as the principal source of energy for sub-Saharan Africa. Harnessing the hydroelectric power of the Congo Basin alone (Inga and Kisangani dams) would be enough to meet all the African energy needs or to light the entire continent of South America. Establishing an African grid would allow for power from the Democratic Republic of Congo to be delivered to power-poor southern Europe countries such as Spain, Portugal, Italy.

What is relevant to hydro-electric power is also applicable to solar energy. The Sahara desert is a vast source of energy that can provide a carbon-free, nuclear-free electrical future for all Africa and Europe, if not the world. However, given that 90% of world reserves of hydraulic energy are concentrated in underdeveloped regions, that likely solar farms are to be located in the Sahara desert and that technology with regard to concentrated solar power (CSP) and high-voltage direct current (HVDC) are the preserve of developed countries, there is a need for a strategic vision and a partnership to be shared both by Africa, the developed and the developing countries to help build global energy and climate security.

Another of our Wednesday rendezvous with Africa... We will be looking at how former British colonies have fared in comparison to their francophone counterparts. Part of our tribute to 50 years of … END_OF_DOCUMENT_TOKEN_TO_BE_REPLACED