Karl Marx predicted that states would wither away in anticipation of an idyllic communist society capable of auto-regulating economic imbalances and empowering the masses. So he would have been flabbergasted to see his prophecy realized, not by communism, but by the globalization of Anglo-American economic liberalism. Opening up markets to the free flow of capital, not the dictatorship of the proletariat, has rendered state power obsolete. 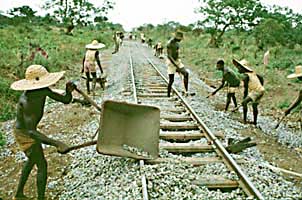 Today’s capital markets raise money for governments, corporate clients, and individual customers, manage pension funds’ investments, and bet on the level of interest rates or the stock market. Trading in derivatives by investment banks, hedge funds, and other market participants, reaps huge profits for traders while depriving the real economy of productive investment and job creation.

No population in the world is spared from the harsh treatment of such a system. Some 40% of the world’s 6.5 billion people live in poverty, and a sixth live in extreme poverty. However, the world’s black populations are the prime victims. In the United States, one-eighth of all black males between the ages of 25 and 34 are in jail, and three out of five black American households with children are headed by a single mother.

As for African countries, the politics and economics of globalization have stripped them of their assets and natural resources and left them with an unbearable debt burden. As a result, the percentage of Africa’s population living in extreme poverty increased from 41.6% in 1981 to 46.9% in 2001.

On the other hand, in the era of globalization, regions in which internal trade exceeds external trade have better economic outlooks and stronger social cohesion. This is the case for Europe, Asia, and, increasingly, Latin America, particularly among the member states of Mercosur (Argentina, Brazil, Chile, Uruguay, and Paraguay). The opposite is true for regional groupings in Africa and in the Middle East where trade with the outside world is more important than intra-regional trade.

As a result, any country formulating strategies to counter the destructive forces of globalisation should give overriding priority to a self-centred economic development strategy, preferably within a regional framework. This is a prerequisite to defending against market fundamentalism and avoiding the iniquitous conditions of the international marketplace.

Exports have remained the main driver of economic performance for the ASEAN countries, contributing to 5.8% regional GDP growth in 2006. ASEAN foreign direct investment (FDI) flows reached US$38 billion in 2005, up by 48% from the previous year. The outlook for 2006 was also bullish, with preliminary data for the first quarter indicating that FDI flows had already reached US$14 billion, up from US$7.4 billion in the year-earlier period. ASEAN’s drive to establish a fully-fledged economic community has been underlined by implementation of its Priority Integration Sector Roadmaps.

By contrast, sub-Saharan Africa’s historical legacy of artificial and unmanageable colonial boundaries, ethnic antagonisms, its citizens’ deficit of self-respect, and an appalling record of leadership failures has hampered its quest for economic integration. But a sector-by-sector approach could mitigate these handicaps, and, given the pressing need to address demand for energy and climate change, it might be strategically advisable to start with the energy sector.

Africa is a continent rich in energy, holding two-thirds of the world’s reserves of hydro-electric power – trillions of kilowatt-hours representing about half of total world resources. The Congo River alone holds more than 600 billion kilowatt-hours of annual reserves. The Sanaga (Cameroon) and the Ogooué (Gabon) hold half as much. Technological breakthroughs have made it feasible to transport electricity via high-voltage direct current (HVDC) over long distances without incurring great losses (only about 3% per 1,000 kilometers).

Carbon-free hydroelectric power is the right choice as sub-Saharan Africa’s principal source of energy. Harnessing the hydroelectric power of the Congo Basin alone would be enough to meet all of Africa’s energy needs, or to light the entire continent of South America. Moreover, establishing an African grid would enable power from the Democratic Republic of Congo to be delivered to southern European countries such as Spain, Portugal, and Italy.

However, while 90% of world reserves of hydraulic energy are concentrated in underdeveloped regions like sub-Saharan Africa, HVDC technology remains the preserve of developed countries. There is thus an imperative not only for regional integration in Africa, but also for a joint strategic vision and partnership to help build global energy and climate security.

Another of our Wednesday rendezvous with Africa... We will be looking at how former British colonies have fared in comparison to their francophone counterparts. Part of our tribute to 50 years of … END_OF_DOCUMENT_TOKEN_TO_BE_REPLACED

Toward an African energy doctrine
Next